European-based Australian violinist Linda Gilbert is a laureate of both Australian and international competitions and is one of the few Australian alumni of Moscow State Tchaikovsky Conservatory, Russia. Her mentors included Peter Zhang, Viktor Pikaizen and Maxim Fedotov, the latter “in admiration of Linda’s most serious attitude to our profession and, in the best sense of the word “fanatical” love of music and the violin...Linda Gilbert will occupy a most worthy place in concert life.” Miss Gilbert also performed in masterclasses in Australia and Europe, including those at Moscow State Tchaikovsky Conservatory, Mozarteum Academy in Salzburg and Blackmore International Music Academy in Berlin, for musicians such as Alexander Kirov, Shlomo Mintz, Michael Vaiman, Haggai Shaham and Zakhar Bron. Since making her acclaimed solo recital debut at age 19 at Manning Entertainment Centre following her win of Roma Liggins Scholarship for Par Excellence In The Field Of The Arts, Linda Gilbert has been increasingly in demand as a soloist and chamber musician throughout Australia and abroad. In addition to her regular busy concert schedules, Miss Gilbert has performed at a variety of festivals and events in such venues as Sydney’s Macquarie University Theatre, Bolshoi Zal of Kostroma Symohony Orchestra, Stanley-Burbury Theatre at the University of Tasmania, Concert Hall of Moscow Central Music School and the Myaskovsky, Rachmaninov and Chamber Halls of Moscow State Tchaikovsky Conservatory. As well as sharing her love of performing for diverse audiences, Linda Gilbert has a passion for educating children and young people in the art of musical performance specialising in the art of violin. Miss Gilbert regularly lectures and gives masterclasses in prestigious Australian schools/multicultural centres in both regional and metropolitan areas. October 2018 will see Linda Gilbert commence Blackmore International Music Academy’s career advancement programme in Berlin, Germany where she will regularly work with Z.Bron, V. Tretyakov and others as well as leading conductors of our time. Linda Gilbert currently performs on an M.A. Heyligers violin and an A.le Gouic bow.

Linda is to commence Fourth Year Undergraduate study at Moscow State Tchaikovsky Conservatory:) YOU CAN HELP ensure her studies continue through to her graduation (2018) by attending this wonderful evening of superb music THIS SATURDAY NIGHT 6/8/16. The programme contains something for everyone! Opportunity to donate will be at conclusion. DON'T MISS THIS THIS EXCITING OPPORTUNITY - YOUR CHANCE TO HEAR TWO OF AUSTRALIA'S FINEST YOUNG MUSICIANS

Love and passion for violin drove her from Australia to Russia

It was nine years ago when driven by passion and love for violin Linda Gilbert moved from Australia to Russia where she entered the Moscow Conservatory and also learnt Russian. Now she is a laureate of prestigious awards and is getting ready for her final exams and to continue her PhD. But this month Linda is back home and will give a few concerts in Australia.

IT WAS a concert fit to be inside the Sydney Opera House, the Royal Albert Hall, Carnegie Hall, or any of the big venues in any of the other capitals of the world - these are the thoughts of local clarinetist Terry Stanton on Linda Gilbert and Paul Cheung's Taree performance last weekend. "The skill and talent of these two young musicians is breathtaking. This is the fourth of Linda's recitals my wife and I have heard," said Terry. "Paul played as though the music had originally been written for the piano, not 20 or 30 different instruments in an orchestra. Terry says Linda's "virtuosity is undeniable". "The works she played are not just good to listen to, but are clearly hard to play if you know about music, but she makes it sound flowing and easy. "She plays with such power, and then such delicacy, such speed and then such gentle smoothness. "There were many good local musicians in the audience and we were all humbled by what we heard." According to Terry, Linda played all the works (with the exception of the Mozart and the Ravel) from memory, a prodigious feat, when there are thousands upon thousands of notes in each of the concerti. Linda says she experienced a very warm and enthusiastic reception by the audience. "I always find playing in Taree extra special because our audience truly recognises the sheer artistic beauty of our program even in works which they may have been hearing for the very first time," she said. "I never imagined that our Taree audience would become immediate fans of the Vieuxtemps Violin Concerto No.5, which brought the house down to conclude the first half with its final virtuosic flourish. "The Russian works on our program particularly enthralled our listeners. Ravel's gypsy-flavoured Concert Rhapsody was a stunning display of Paul Cheung's breathtaking virtuosity on piano, which for me felt as exhilarating to collaborate with as when performing as soloist with a full symphony orchestra. "Paul and I immensely enjoyed the lovely acoustic of the Taree Seventh Day Adventist Church Hall. "We were pleased to surprise our audience with an encore, Debussy's 'Beautiful Evening'."

Linda Gilbert will conclude her Australian tour in her hometown of Taree this Sunday. Photo by Modnoe Foto. VIOLINIST Linda Gilbert will wrap up her 2014 tour with a recital in Taree this Sunday. "It's so special to end my series of concerts with a performance in my hometown and always so nice to catch up with old friends from many years back," said Linda (pictured). "We so appreciate the unique warmth and great interest of our Taree audience. I am looking forward to Sunday immensely." The recital will be held at the Seventh-day Adventist Church Hall on the corner of Cowper and Gipps streets in Taree, starting at 3pm. The performances this year have taken place in regional NSW as well as venues in Sydney and Adelaide. "It's been an absolute pleasure to play with several different pianists on this year's tour, all of whom are enormously talented artists based in Sydney: Paula Lu, Katerina Makarova, Nadia Koudasheva and Paul Cheung." Linda, 27, said she and Paula look forward to presenting a wonderful selection of music in Taree, which includes something for everyone. "Solo and duo works by one of the greatest musical geniuses of all time, JS Bach (with second violin soloist Li-Ren Sheng) will open our program, followed by the warm and lyrical, yet passionately dramatic Violin Sonata in A by French romantic composer Caesar Franck. It's such an exciting work to perform and we know the audience will love it very much. The Franck Violin Sonata is universally recognised as one of the cornerstones of concert violin repertoire and is undisputedly regarded as one of the finest works written for violin and piano. We continue in the second half with Beethoven's endearing Romance in F and delightful virtuoso miniatures by Fritz Kreisler and Pablo de Sarasate. Sunday's recital will culminate in the spectacular Suite in A minor by nineteenth-century Norwegian composer Christian Sinding. "It has been a delight to also include at selected concerts in this year's Australian tour, double concerti by J.S. Bach and Antonio Vivaldi, collaborating on these occasions with second violin soloists Li-Ren Sheng and Leo Novikov." Linda has been studying the violin since she was six, made her solo recital debut at age 19 and has won major prizes and special awards at numerous competitions in Australia. She went onto study in Sydney with the distinguished professor Shi-Xiang Zhang for five years before, in 2008, she travelled to Russia to participate in Moscow Tchaikovsky State Conservatory's International Summer School. Linda is currently furthering her study at Moscow State Tchaikovsky Conservatory majoring in violin performance, and will start her second year of Undergraduate Diploma study in September 2014 with professor Viktor Pikaizen. "I'm looking forward to exciting new opportunities in 2nd Year in the areas of chamber music (piano trio, string quartet) and the study of violin pedagogy." She is also preparing for further recitals in Europe/USA and plans to enter several international violin competitions within the next two to three years. Linda will be joined in her recital by acclaimed musicians, pianist Paula Lu and violinist Catherine Sheng.

Recital: Linda Gilbert grew up in Taree and always enjoys coming home from her studies in Russia to perform. Violinist Linda Gilbert returns to her hometown of Taree this weekend to give a recital at the Seventh-day Adventist Church. “I am always honoured to play for the exceptionally warm Taree audience,” said Linda. “This year my pianist from Melbourne, William Schmidt, will join me in what I can promise is an event not to be missed.” The afternoon, titled Reflections of Greatness, will include performances of masterworks for violin and piano by Mozart, Brahms, Chopin, Wieniawski and more. The recital is a chance for Linda to raise funds that will allow her to continue her studies in Moscow, Russia. This year she is also honouring her late father, William Scott Gilbert, who passed away suddenly last September. “I am very glad that this concert program contains all Dad's favourites, not least the Brahms Violin Concerto.” Next month sees Linda begin her final year of study in the Undergraduate Diploma at Moscow State Tchaikovsky Conservatory. “I am so honoured to study for the past two years under renowned violin virtuoso, conductor and pedagogue Professor Maxim Viktorovitch Fedotov,” said Linda. Linda Gilbert with her professor Maxim Viktorovitch Fedotov. “He has opened my eyes to what artistry in violin playing and being a true performer is all about. “His powerful playing and insightful artistic advice have had a very deep and powerful influence on me not only as a violinist but also as a person and I think that is very important. “Now that I am in my final phase of study, Maxim Viktorovitch says he is very glad I have been having such professional performance opportunities of late, and that at this stage it is about getting as many of these performance opportunities as possible, including many competitions.” At the age of 30, Linda said the quantity of international competitions left to try is somewhat smaller (the age limit is often 32). “I am planning to still take part in whatever large-scale international competitions are still available to me.” Last year Linda gained second prize in Italy's Euterpe International Competition. Throughout July and August this year Linda has travelled to various parts of Australia to perform concerts, violin demonstrations and masterclasses (Linda also has a great passion for teaching). She plans on entering the Moscow State Tchaikovsky Conservatory's Doctorate degree mid next year majoring in performance. The recital is on at Taree Seventh-day Adventist Church, corner of Gipps and Cowper Street, Taree, at 3pm Sunday August 20. It is free, with donations gratefully received to help Linda fund her graduation year. On August 12 Linda Gilbert gave a violin demonstration and mini recital at the Mozaika School for Russian-speaking children and their parents in Perth. "Meeting and playing for them all was an absolute delight, especially as it was a chance to communicate in Russian which I am able to speak fluently."

Pianist William Schmidt, who will be appearing with Linda, completed his Master of Music Performance at the University of Melbourne under Glenn Riddle in 2011, as well as a Master of Arts with distinction in piano performance at the Musik und Kunst Privatuniversität der Stadt Wien in Vienna under Prof. Johannes Kropfitsch in 2015. William has worked extensively as an accompanist, chamber musician, solo performer, music director, composer and teacher in Australia, Austria and Italy. He has performed in partnership with eminent musicians such as tenor Hannibal Means of America's Got Talent fame, and has been recorded live many times for radio stations 3MBS and ABC Classic FM. He has also had his compositions broadcast on both of these stations, and was the featured composer for the Camberwell Music Society's 2011 concert series. 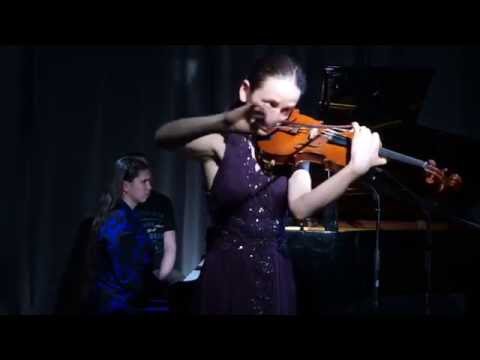 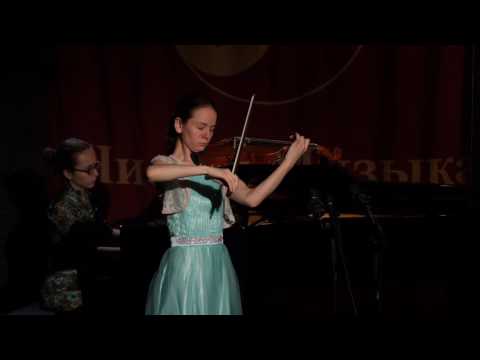 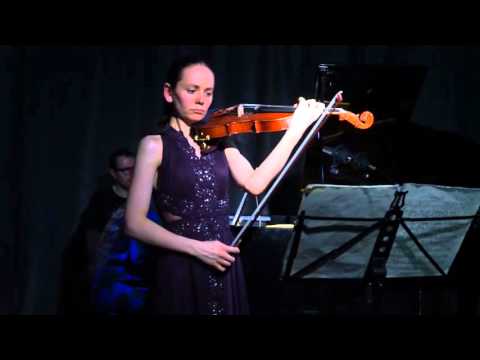 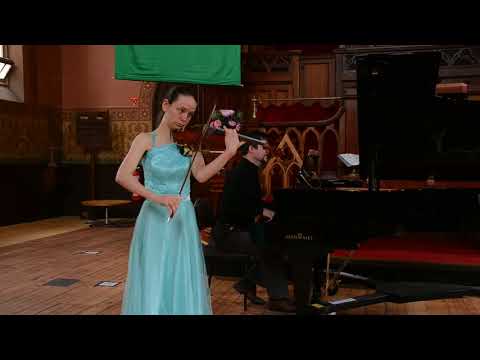 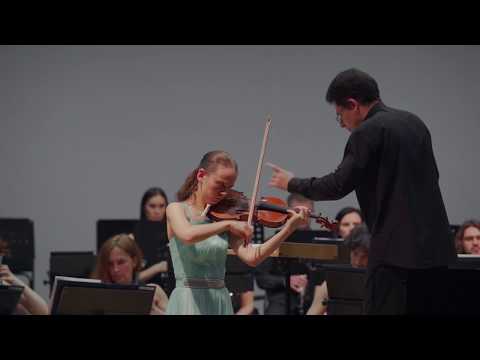 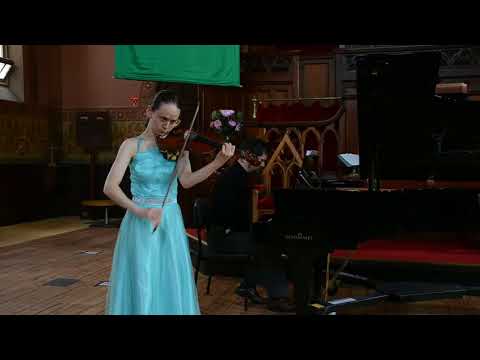